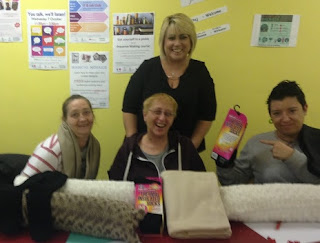 The group discussed and decided that for next month's meeting they would each suggest three energy changes that they could make at home. Some of the possible changes that the Task Group are considering include turning down their heating thermostat, looking at how often the boil a full kettle for one cup and if they leave lights on unnecessarily.

The group also had discussions around the principles of layering up and were given socks and blankets to use before they switched their heating on, as the weather gets colder.

Additionally all the members agreed to keep an energy consumption diary over over the winter months and to see if some of the suggestions genuinely save them money.

Eventually this group are set to become Energy Champions for the L8 area and we are looking for more people to get involved.  So if you are interested in getting together to have some fun whilst testing out ways to reduce the energy you use, get in touch!
Posted by Tara